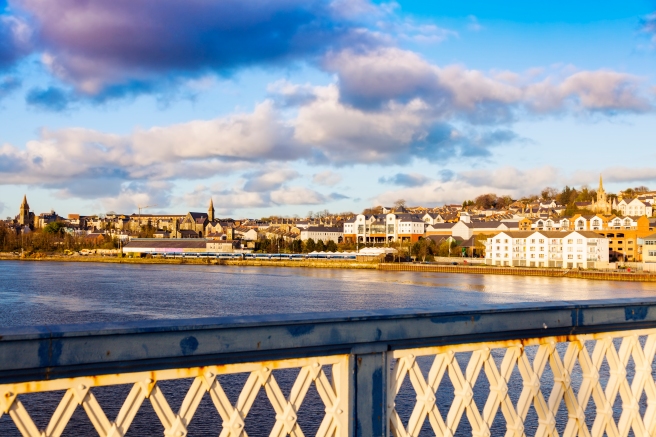 Above: Paul Hickman led a study team comprising researchers from Sheffield Hallam University, The University of Sheffield and Queen’s University Belfast, which explored the experiences of low income households across Northern Ireland. Two of the case study areas were in Derry/Londonderry (pictured).

The difficult and uncertain times we live in has resulted in increasing attention focusing on how households respond to challenging circumstances. This has seen the concept of ‘resilience’ come to the fore. Although it is a ‘slippery’ and elusive concept, historically, it has been viewed by both academics and policy makers alike as the capacity of an individual to respond positively to a (single) setback or shock.

In the UK, the concept has been widely used in a range of policy domains including social policy. The UK Government has been keen to use the term in this context because it emphasises self-help and agency (i.e. the ability of individuals to make their own choices and act independently) over structural factors, like financial crises and austerity. The construct has also been increasingly used by academics researching social policy, particularly those in poverty studies, who have been attracted to it because of their dissatisfaction with ‘deficit-model’ explanations of poverty, which blame individuals for their situations.

However, a paper I have had published in the Journal of Social Policy Society* argues that there are fundamental problems with using resilience in the context of economic hardship. This is because in this context it is inadequately conceptualised, difficult to measure, and poorly placed to deal with the complexity of the lives of low income households, who face multiple stressors.

Furthermore, the research, which unpacked the experiences of low income households in Northern Ireland, found there to be few positive connotations associated with being ‘resilient’ i.e. living with economic hardship. Indeed, the experience for most participants was a negative one: ‘getting-by’ adversely affected their health; was tiring and wearing; negatively impacted on their children; and was a source of shame and embarrassment. However, that is not to say that individuals did not exhibit a bundle of positive characteristics that helped them ‘cope’. These included adaptability, ingenuity, stoicism, resourcefulness, selflessness, high levels of endurance and a strong will not to be overcome. But for most participants being resilient was not about ‘bouncing-back’, flourishing and thriving in the face of adversity – it was about enduring, surviving and ‘getting-by’.

These findings have a number of implications for policy:

• The use of the term ‘resilience’ is highly problematic.

• Policy makers should avoid championing and promoting ‘resilience’, as one of the key conclusions of the research is that most of the factors that allowed individuals to be ‘resilient’ were negative in nature. These included: going without food, heating, and lighting; lowering and managing expectations, and adaptation.

• Instead, the emphasis should be on removing low-income households from hardship and not on helping them to cope with it better. Notwithstanding this, it is imperative that policy makers continue to support those structures that allow low-income households to cope financially, such as Voluntary and Community Sector organisations.

• Initiatives that encourage residential mobility amongst low-income households – such as the Removal of the Spare Room Subsidy (or the so-called ‘Bedroom Tax’), which penalises social housing tenants who under-occupy their homes by reducing their Housing Benefit/ Universal Credit – are likely to have a detrimental impact on them. This is because they risk disconnecting them from the principal resource that allowed them to ‘get-by’ – the support, whether financial, practical (such as childcare) or emotional, provided by friends and family who, more often than not, lived locally.

• While the concept of resilience may be flawed, it is important (in a context of ongoing austerity and welfare reform) that research continues into the lived experiences of low-income households, whether it is badged as ‘resilience’ research or not. This is particularly important in the context of the final message for policy: many participants who reported that they were struggling to ‘get-by’ also reported that they could not trim their budgets further, with no scope for further ‘sacrifices’ to be made in light of any future financial stressor.

By Paul Hickman, Professor of Housing and Social Policy at Sheffield Hallam University