The number of ‘looked after children’ has been steadily rising since the early 1990s (Department for Education, 2016). Cafcass reported a 64% increase in the number of care applications made between 2008-09 and 2013-14. This is becoming a sizeable social problem, and harder to ignore. There are complex reasons behind the sharp rise in recent years, but data from 2008 onwards reflects the impact of the “Baby P” (Peter Connelly) case.

Graph: Children looked after in England 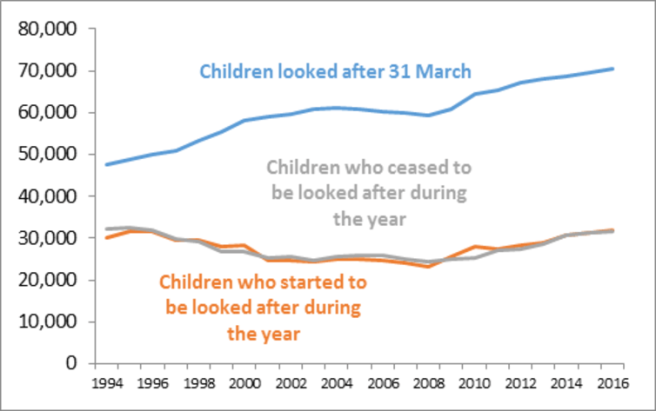 Where are the parents?

We know that ‘looked after children’ face a higher level of disadvantage for example they are more likely to become homeless and have subsequent contact with the criminal justice system, but what is the fate of their parents? It seems logical that in addressing the number of children entering and re-entering care we need to look firstly to the parents from whom children are removed.

There is limited research into the child removal experience from the perspective of birth parents, and even less on birth mothers experiencing repeat removals of children. My research into women’s experiences of social policy interventions highlighted that birth mothers find child removal traumatic and that it often compounds multiple and complex problems ranging from poverty, domestic violence, drug or alcohol misuse to childhood experience of abuse. It also showed that intensive intervention from statutory services up to the point of child removal is interspersed with what is experienced as abandonment by birth mothers once the child is removed, this appeared to be a factor in recurrent pregnancies and removals.

In my ongoing doctoral research I am continuing to gather the experiences of women who have been subject to the ‘looked after children’ process, amongst other social policy interventions. I am using a mixture of qualitative research methods including in-depth interviews and visual research methods. The picture below is of participant Carly (pseudonym) visiting her child in a contact centre. Her son (pictured but blurred for ethical reasons), her fifth child, had been removed shortly after birth and placed in temporary foster care, with supervised contact until the case went before the family court.

“I want to be a mum now, I just want to settle down and live my life with [him].”

“It’s me past, and I know I’ve got a horrendous past, but people can change, but it’s just giving me that chance to show that I’ve changed…I’m just not being given that chance…I’ll never stop being labelled because of my past.” (Carly, aged 33) 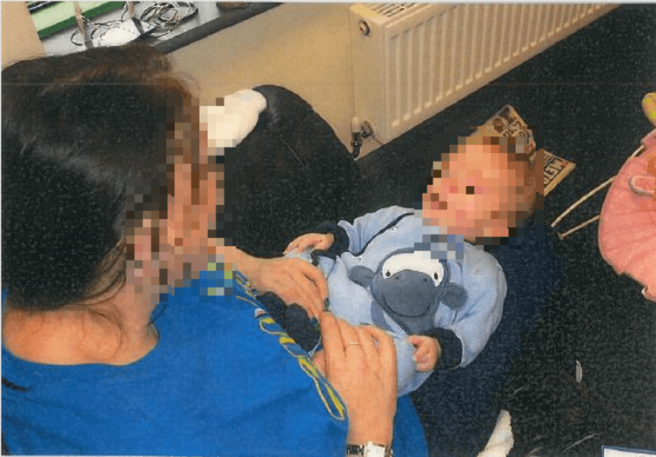 Image: Carly visiting her child at a contact centre

The first attempt to measure the scale of this issue in England found that in the sample a notable proportion (15.5%) of birth mothers were caught in a cycle of repeat pregnancies; these women were linked to almost a third (29%) of all care applications, they also found that 22,790 children were linked to recurrent care proceedings.

How have we arrived here?

There are complex reasons behind these statistics, but there are some factors which have contributed more than others.

An important factor has been the shift from child welfare to child protection which has changed the nature of social work. There is higher pressure from large, complex caseloads combined with a fear of getting things wrong – understandably so when highly publicised cases are considered – and, as a result social workers have less time to devote to each case and are more risk averse in their decision-making. My research indicated that a history of being in care and previous child removals played a part in subsequent removals. This is not a new phenomenon; public policy often focuses on the child rather than the mother. A continued focus on the child rather than supporting better parenting appears to contradict the efforts of the Troubled Families programme.

Research has highlighted a careful crafting of the bad parent as a modern folk devil often along class lines; with [exceptional cases such as that of Mick Philpott stoking public sentiment against ‘benefit broods’. Though the circumstances surrounding high profile cases such as Mick Philpott and Karen Matthews are extreme and rare, they dominate media discourse and their impact filters into practice. A report released earlier this year has highlighted the unnecessary removal of children from poorer mothers. However, a large number of my participants were multiply deprived and some had been through the criminal justice system, and as such are powerless to counter the decisions made by professionals involved in their child removal cases.

Retrenching welfare and increasing inequality has intensified the precariousness of those at the bottom of the society. Austerity has been shown to impact women and lone mothers particularly hard, affecting wages, jobs, services such as the closure of women’s refuges, and both in and out-of-work benefits. These are likely to exacerbate the number of families in crisis.

There are emerging projects which look to prevent recurrent births and removals, but these solutions focus on promoting long-term contraception or sterilisation. This raises many ethical questions, but also highlights a flaw in how the issue is being approached in that it places no value on the life of the mother and her welfare.